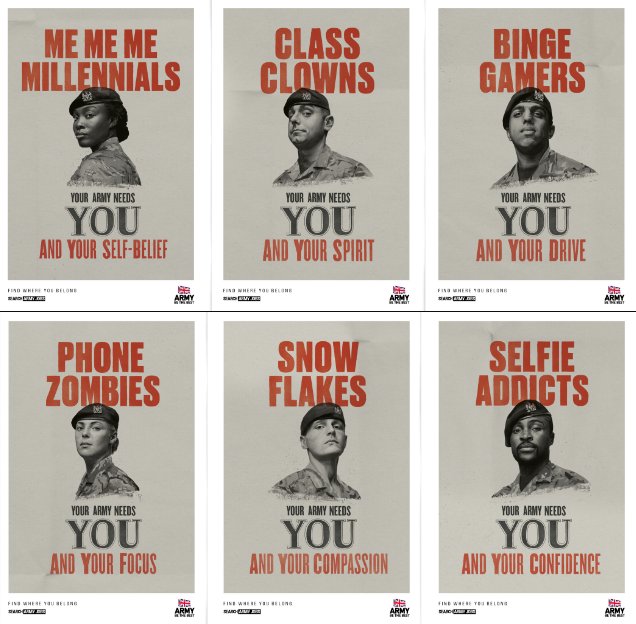 One might have thought, with the advent of remote-control killing and combatant-free warfare, that it would be the easiest thing in the world to lure new recruits into the military in the twenty-first century, especially given the rapidity with which entire professions continue to disappear. Where in the world can a young person find a well-paying, salaried position with good benefits, a pension package—and even healthcare? Where else can one find a job guaranteed NEVER to disappear, no matter what future technology may bring?

All of those perks, and the progressive removal of soldierly risk from the war equation, have still not sufficed to fill the ranks, even as the Iraq fiasco fades fast from popular cultural memory. Witness the British Army’s recently launched, bold marketing campaign, which targets, well, anyone! You may be the Class Clown, a Me-Me-Me Millennial, an i-phone Zombie, a Selfie Addict, a Binge Gamer, or even a Snowflake! Sure, the personality traits often corresponding to those types–irresponsibility, narcissism, OCD (obsessive-compulsive disorder), ADHD (attention-deficit-hyperactivity disorder), and excessive sensitivity–may have disqualified prospective enlistees in the twentieth century. But no more!

What used to be vices have become, in the Drone Age, reimagined as virtues! 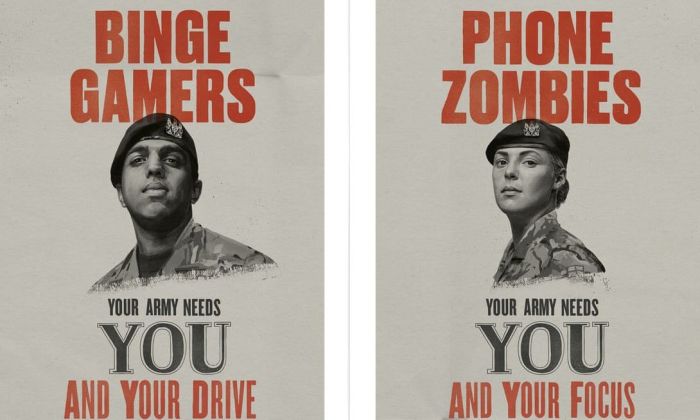 It comes as no surprise, of course, that military recruiters are targeting gamers and I-phone zombies. What the twenty-first century warrior needs, above all, is the ability to stare at a screen in a small, dark room, for many hours a day. Binge Gamers have the added credential of having already spent thousands of hours of their life attempting to “light up” icons on their computer screens. Why not put this skill to work in lighting up real live human beings???? 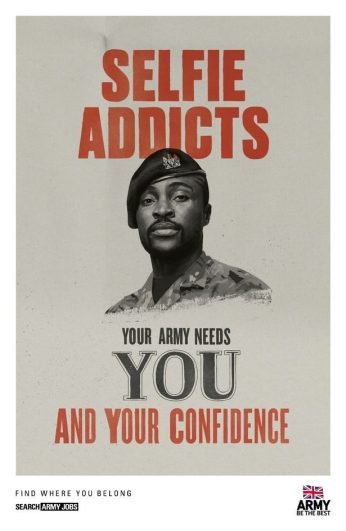 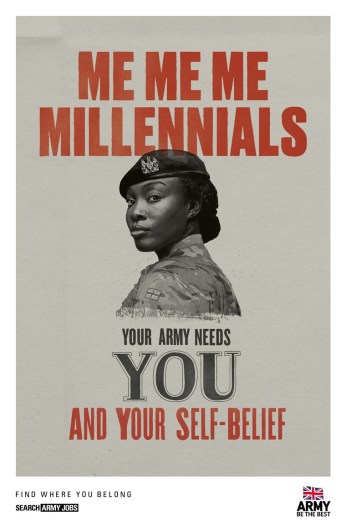 But there is room in the technologically advanced, twenty-first-century Killing Machine military for Me-Me-Me Millennials and Selfie Addicts, too! Who better to recruit to erase other people–designated by someone somewhere as “evil”–from existence? Why it’s a dream come true for any self-respecting narcissist: you can play God Almighty, possessing the power to wipe other people from the face of the planet with the push of a button! 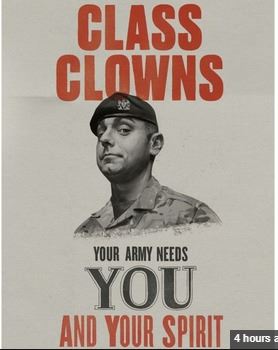 And it’s always good to have someone on hand with a sense of humor–as “towel heads” and “Hadjis”, “rats”, “mice”, “rabbits”, and “bugs” are systematically snuffed out, or “splashed”–to remind stodgier types present that “This wasn’t a bake sale,” and “You know what’s going on in the BadaBing!” Hooaah! 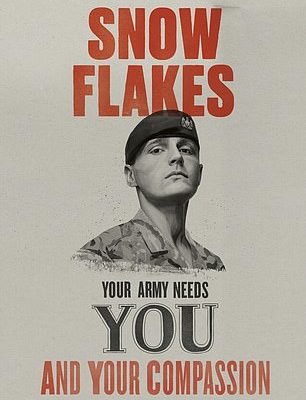 The surest sign that things are not going so well in the recruitment departments of modern military institutions is that they are now reaching out, improbably, to Snowflakes as well! But there is an explanation for this, too. First, Snowflakes like safe spaces. What could be safer than a hermetically sealed metal shipping container located in a desert thousands of miles away from the battlefield? And should the Snowflake experience any compunction whatsoever about what he or she has done, that will be remedied immediately with a liberal dose of some of the latest and greatest pharmaceutical developments being lavished upon modern soldiers, both on and off “the battlefield”: antidepressants, anti-anxiety antidotes, antipsychotic meds used for off-label conditions such as insomnia, the sky is the limit–the list goes on and on! 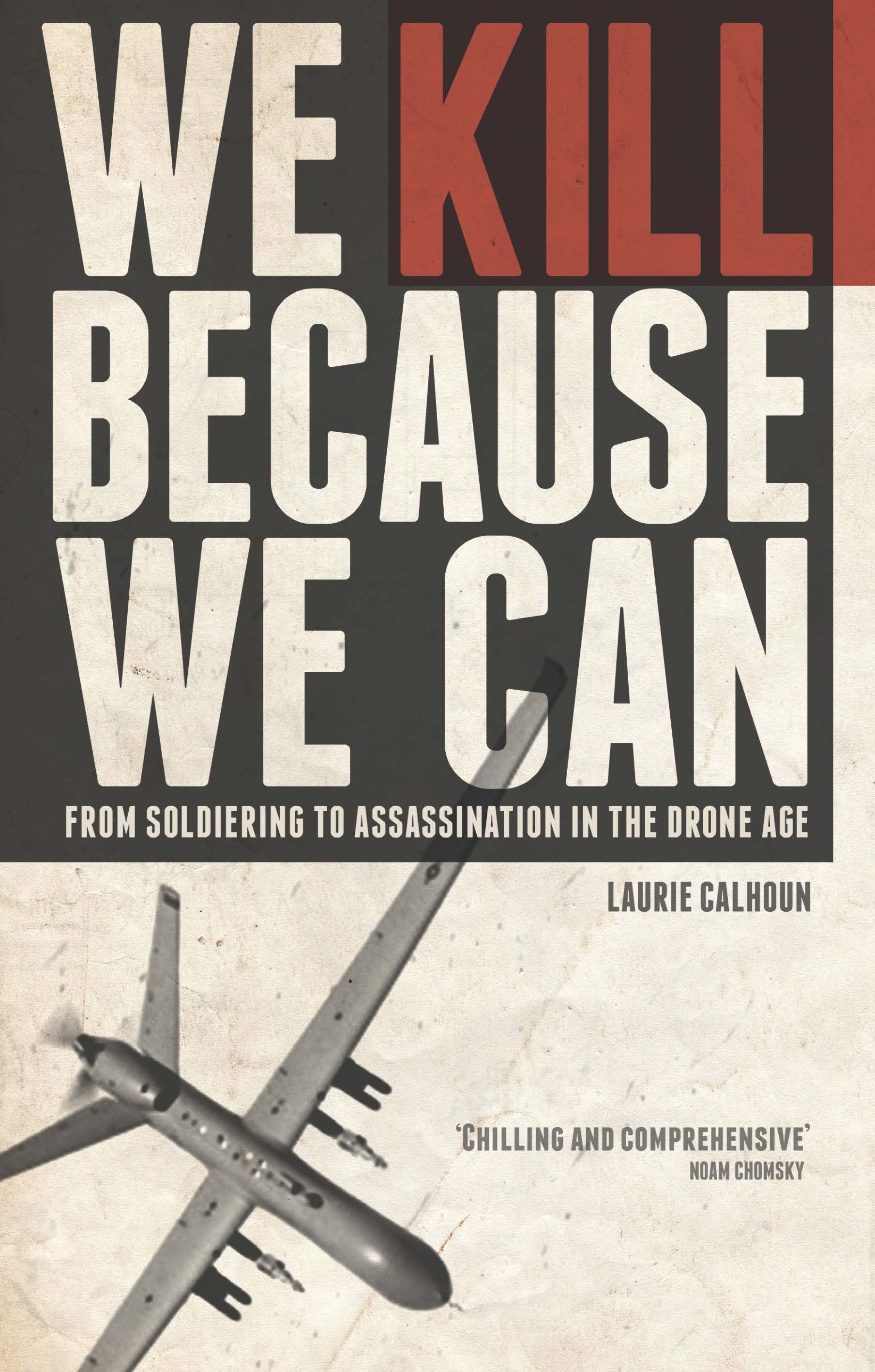