Once upon a time, the president of the United States was the person who determined US foreign policy. Those days have been over for at least fifteen years, as the Oval Office has been occupied by men who delegate the most delicate of all decisions, regarding the taking of human life, to the very institution whose raison d’être it is to kill.

By announcing that lethal drone sorties will be increased from the current 60 per day to 90 per day by 2019, the Pentagon has inadvertently implied that the Manchurian Presidency will continue beyond the departure of Barack Obama. Apparently, it does not matter who wins the 2016 election, since the Pentagon is now calling the shots and penning US foreign policy.

Less than two months ago, news outlets reported that lethal drone sorties would need to be curtailed from 65 to 60 per day because of the exodus of many drone operators whose enlistment terms are expiring. That some lethal drone operators are opting not to continue on in their capacity as professional killers was welcome news. Perhaps the burden on some of these people’s conscience has become too difficult to bear, just as happened to the brave Brandon Bryant who has shared his experience in the hopes that others can learn from his mistake.

Who will fill the gap between the 60 lethal drone sorties which the US Air Force can currently cover and the 90 which the Pentagon is projecting? In all likelihood, private military companies (PMCs) will be providing the manpower for the increase by 50% of the number of communities around the world to be terrorized by lethal drones hovering above their heads.

Shame on the presidents who let both the CIA and the Pentagon go rogue during their terms in office. Shame on the people of the United States of America for permitting this to transpire. 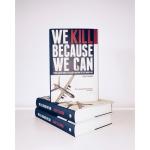 For more information and related criticism, see We Kill Because We Can, Chapter 4: Lethal Creep