On Wednesday, November 2, 2016, I had an interesting midday conversation with Sean Sullivan of FMTalkRadio 106.5 in Mobile, Alabama. We discussed:

–parallels between the Brexit vote in the UK and the Trump movement in the US;

–arguments against the use of lethal drones outside war zones;

–what I mean by “We Kill Because We Can” (the title of my book on drone killing);

–a few words about the importance of free speech to a flourishing democracy.

Here’s a link to the podcast:

My informal survey yesterday of a random sample of the good people of the village of Burnham, Buckinghamshire, and my short random exit poll survey this morning both revealed a strong outpouring of support for Brexit. None of the people with whom I spoke struck me as racists, and most did not even mention the topic of immigration, though all signs point to immigration as one of the most important factors in voters’ decision-making on this historic day. Yes, for the first time in more than forty years, the British people are being permitted to weigh in on the wisdom of their country’s membership in the European Union.

One of the most interesting things I noticed in chatting with these people was that they often began revealing their preference for “Leave” in a hesitant, hushed voice. Once they realized that I was not a Remain Shamer, some of them began pouring out their many concerns. I spoke with a nurse whose retirement was postponed for four years by the EU. I spoke with a woman with small children who had noticed that the National Health Service (NHS) had become difficult to access. Of course, the Tories are certainly in part to blame for that, but it does not help, she lamented, that there is so much competition for the already scarce social resources.

A couple of people were angry about Prime Minister David Cameron’s doom-and-gloom “the sky will fall if we leave!” narrative. One person expressed offense at President Obama’s threat to the effect that Britain will go to “the end of the queue” for trade if they leave the EU. I got the distinct impression that Brits do not generally believe that Britain will suffer any long-term damage from leaving the EU, though they are aware that there will be bumps initially, whatever the outcome of the EU referendum ends up being.

It seems obvious to most people that lots of nations are not members of the EU, as Britain was not before, and they are doing quite well. Many people (not only the people with whom I spoke, but elsewhere on the internet) have expressed consternation about the topic of trade, not knowing whom to believe. The bankers? The EU technocrats and political elites? Why in the world should it be more difficult for Britain to trade freely than to navigate the volumes of regulations pumped out by the EU? How could it be more difficult for small businesses to not have to comply with the edicts of Eurocrats before selling their products and services abroad? 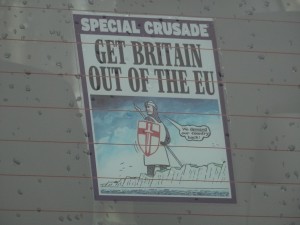 The people with whom I spoke seemed far more concerned about sovereignty and self-determination than anything else. A few mentioned “control” over their own laws. A casual glance at the inflammatory Remain campaign rhetoric being pumped out would suggest that all Brexit supporters are somehow enamored of Nigel Farage and the UKIP (United Kingdom Independence Party). Not so, however. (Perhaps that’s why Farage skipped his last debate? Did he finally realize that, like Cameron, he was hurting, not helping, the cause he so ardently champions?)

Of course, it is entirely possible that many people are really concerned above all about immigration but wish to avoid being associated with racists and far-right extremist groups. Some crazy person assassinated MP Jo Cox last week, and there was an immediate poll effect: Remain got a big boost, as did the markets. This happened because people were moved by emotions to conclude that Brexit advocates must be crazy people. Obviously, that’s a non sequitur of gargantuan proportion, but good luck explaining that to emotion-driven voters. Particularly in this debate, where scare tactics, fear-mongering, and appeals to emotion are everywhere on display.

One thing is clear: no one with whom I spoke understands how the admission of an ever-lengthening list of new member nations is supposed to strengthen the European Union—which everyone on both sides of the debate appears to agree is a sinking ship. If all of the new members are worse off economically than the United Kingdom, then how can the new members possibly contribute to plugging the hole in the hull?

This just seems like common sense to many people: How many Brits want to move to Croatia or Albania? I am guessing that the number is rather small. And so there is bound to be real concern among the British people about the projected increase in their population in the coming years. Some of these people may have racist fears, but the numbers alone are enough to cause one to pause.

Moreover, the more member nations there are in the European Union, the less important becomes any single country’s voice, including that of Britain. Each time the EU grows larger, each member state (aside from the new inductees) automatically has less, not more, power. 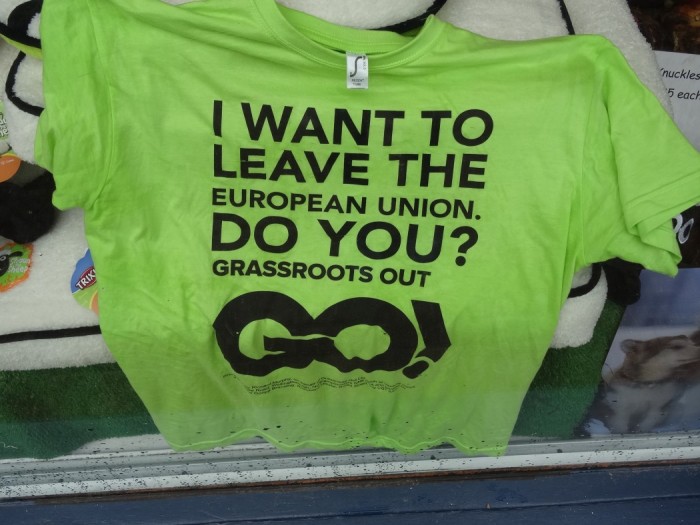 I am well aware that some advocates of Brexit are far-right racists, but others simply abhor bureaucratic, democratically unaccountable hegemons. One wouldn’t know it from scanning the acrimonious ugliness poured out by self-styled “liberals” on Twitter and Facebook, but there are some pretty solid progressive arguments for Brexit.

For one thing, the trade agreements recently negotiated in secret—the TPP, TTIP and TISA—are all tyrannical megacorporate monstrosities inimical to workers everywhere. Any latte-sipping member of the bourgeoisie who claims to favor Remain without first studying the effect of these agreements on the workers of the world is a liberal only in name. (One can learn a lot about the Remain bloc by checking out the arguments proffered by #CatsAgainstBrexit on Twitter…) 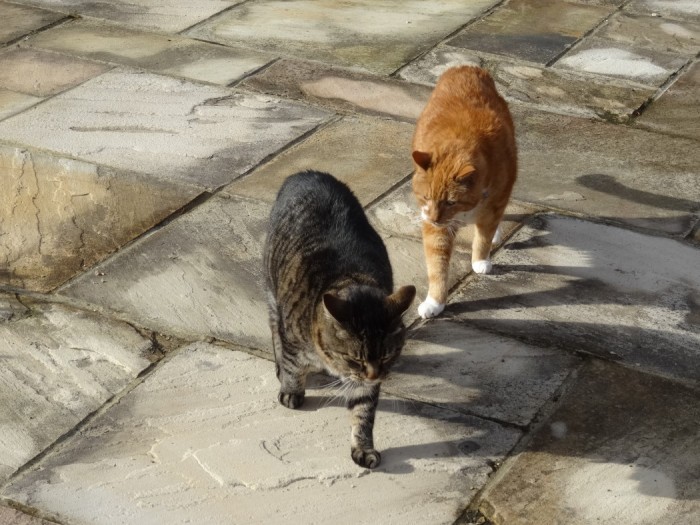 My own honest puzzlement about this entire dispute is over the issue of immigration, but not in the way in which anyone else appears to be worried. To be perfectly frank, I have never understood how granting preferential status to fellow Europeans (most of whom are, I believe, Caucasians) is somehow less racist than treating all outsiders equally. This is a serious puzzle for me. Please step forward in the comments section to disabuse me of my misconceptions here, but how is it supposed to be less racist to permit unskilled Europeans to move freely throughout the European Union but not, say, Africans or Muslims from the Middle East?

This brings us, at last, to the now notorious “Breaking Point” poster denounced by fair-minded liberals the world over:

Everyone seems to grasp intuitively that this poster is abhorrent. But no one, as far as I have seen, is discussing how this picture was made possible. The truth is that the above picture of a mass of homeless human beings came about only because of fierce military intervention in the Middle East, with the United States as the primary perpetrator, but other Western nations, including the United Kingdom, also bombing Muslim nations on a regular basis, thereby catalyzing the exodus of large numbers of people, who quite naturally wish to preserve their own lives, as any rational person in their situation would.

President Obama dropped more than 23,000 bombs on Muslim-majority nations in 2015 alone. Some were delivered by drones; others by manned combat aircraft. Either way, that’s a lot of bombs, and that’s a lot of “death from the sky,” to quote his speech at Hiroshima. Under Obama’s leadership, the United States is fighting wars and providing homicidal weapons to rebels in at least seven different countries in the Middle East alone.

Small wonder that the populations of those lands have been leaving in a steady stream—or tsunami, as the case may be. What else can they do? Too bad they can’t come to the United States, because that is where all of those people belong, given the reason for their displacement. Only when the people of the United States begin to suffer the consequences of their government’s military intervention abroad will they finally be motivated to call a halt to the mass homicide committed in their name.