I have long believed that well-made films offer a rich source of moral insight, and Drone Strike, directed by Chris Richmond, is no exception to the rule. It’s a very short film, less than twenty minutes long, but like a carefully crafted short-story, it packs a mighty punch. The primary means of conveying its message is to switch back and forth between two families in two very different contexts: a white-skinned family living amidst all of the modern conveniences in the United Kingdom, and a brown-skinned family living with hardly any modern conveniences in Afghanistan.

The father and husband in the UK, Will Brydon, is a Royal Air Force (RAF) drone operator. He dons a uniform, grabs a quick breakfast with his family, kisses his wife goodbye, and drives his car off to work, dropping his son off at school along the way.

Brydon’s office is a trailer, not unlike those at Creech Air Force Base in Nevada. Like his analogues in the United States, he spends his day sitting before a screen, joystick in hand, ready to “engage” targets as orders are transmitted to him by a radio dispatcher. Brydon has no direct access to the intelligence being used by analysts and commanders to determine whom to kill, but he is able to see the targets before firing on them. When he and his comrade, the laser operator, are given clearance to eliminate a target, they go through a series of steps to lock on with a laser before taking the shot.

The father and husband in Afghanistan is a brown-skinned adult male, empirically indistinguishable from an “evil terrorist”, as far as the drone program analysts are concerned, although they have no idea who he really is. He is about to be made the victim of the latest “signature strike”, the targeting of a brown-skinned male of military age whose behavior coincides with a “disposition matrix” of known terrorist behaviors.

On the fated day depicted, the “suspicious-looking” man has driven his truck to a place thought to be frequented by “evil terrorists” and is on his way home. What was he doing, rubbing elbows with suspected terrorists? He was filling up the bed of his truck with rocks to use back at his dirt-floored home. Judging by their somewhat surly exchange, he was not on particularly good terms with the men from whom he was buying the rocks. Clearly his “association” with these people involved no more than a simple business transaction.

On his way home, the loud sound of a missile strike off in the distance disrupts his concentration, causing him to drive over a gaping hole in the road. As a result, one of his tires goes flat, and he needs to fix it in order to continue his journey.

The rest of the story is all too familiar to anyone who has read NGO and human rights reports on the drone campaigns: the British father and husband uses the latest and greatest military technology to obliterate the Afghanistan father and husband, who is out in the middle of nowhere fixing a flat tire. He had the misfortune of being spotted by analysts behind the scenes whose job it is to locate suspected terrorists to kill. To do their job well, they must deliver. Better safe than sorry! they decide on the basis of their drone footage, in some cases supplemented by the bribed testimony of locals.

The RAF drone operator initially questions the identification of this man as a terrorist, and vocalizes his impression that it just looks like a guy with a broken-down truck. The laser operator scoffs at his comrade, crowing “Guilty as Charged!” and seems excited about the opportunity to “get some”. Together the two soldiers fire on the suspect, and the laser operator cheers when the missile obliterates the target, calling him a “mother fucker”.

Later, after returning home to his family, Bryson begins to reflect upon what he may have done, as doubts are bubbling up again in his mind. Perhaps the man by the truck really was an innocent husband and father out gathering rocks to shore up the walls of his crumbling home. The naggings of conscience begin to creep into Bryson’s consciousness, likely never to be fully expunged. Over time, his skepticism may develop into regret and feelings of guilt and shame about the day when an innocent man’s life was ended because he capitulated to peer pressure and suppressed his skepticism in the moments prior to launching the missile.

The British family has no idea what the soldier has done, but the survivors in Afghanistan are plunged into grief upon the loss of the head of their household. If the drone operator continues on in this profession, he may eventually develop PTSD.

In the final shot of the film, the young son of the slain father is shown in a visible state of rage, his face illuminated by light on one side, and shrouded by darkness on the other. The implication is clear: this is precisely how fledgling terrorists are made. They are reacting to their own experience or witness of crimes by the enemy against which they vow to retaliate. 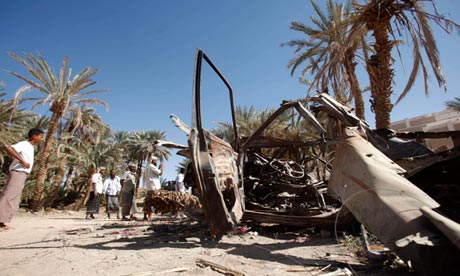 The power of Drone Strike inheres in its ability graphically to display a number of undeniable truths which are violated by the drone warriors each and every day:

This short but thought-provoking film can be watched through Amazon Prime. It might also be on YouTube somewhere, but I was unable to find it, given the preponderance of videos which come up upon searching for “Drone Strike”…