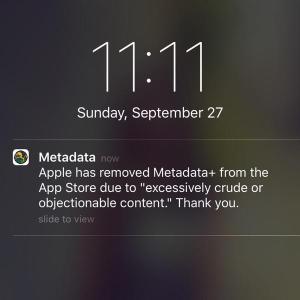 The removal from the Apple company store of Metadata+, an app used to track deadly US drone strikes, underscores an uncomfortable truth. Westerners don’t really want to know what their government is doing with their money and in their name. The ugly reality is both “excessively crude” and “objectionable,” precisely the reason given by Apple for the removable of the app from their store.

Missiles are being launched from drones thousands of miles away to kill people who pose no immediate threat to the people who pay for their deaths. “Collateral damage” is the label applied to dead civilians. But nearly no one takes note of either the immediate or the later effects of drone strikes, because the reports made by the killers are sanitized to remove “excessively crude and objectionable content”. People simply do not want to know.

Metadata+ provided a record, a chronology of the strikes carried out, not images of the blood and guts, the incinerated corpses, the screaming children maimed because they were caught in the radius of fire. Metadata+ said nothing about the widows and orphans left behind, the homes destroyed, and the communities terrorized all at the same time. Yet Metadata+ offered the opportunity to pause to reflect for a moment each time another drone strike caused all of these effects.

Were the populace to think through the implications of the crimes they are paying their government to commit, would they still claim to support the drone program? I doubt it. Everyone supports “defense”–it is obviously good, in the way that “murder” is obviously bad. It would be a failure of rationality not to support “defense”, if that means self-preservation. The question, however, is this: how can drone strikes constitute acts of defense, when they leave in their wake not only craters and carnage but irate and traumatized survivors as well? Some of those outraged by what they have seen vow to seek revenge. Let us call the drone program, then, what it really is: a perpetual motion terrorist-producing machine.

Metadata+ provided information available through other sources, but receiving an immediate notification of the latest strike held the potential to prompt people to think about the consequences, which are indeed “excessively crude and objectionable”. Most people prefer the reality of drone strikes to remain in the realm of the “unknown unknowns”. Meanwhile, politicians bolster their image as strong on defense by claiming that the drone program is keeping the nation safe.

For more information and related criticism, see We Kill Because We Can: From Soldiering to Assassination in the Drone Age, Chapter 5: Strike First Suss Questions Later; and Chapter 10: Death and Politics