“By far the best book on drone warfare and the ethics of targeted assassinations to date.”

“brilliant enquiry into the mindset of perpetrators and supporters…”

“This important work will be helpful in any re-examination of drone policy.”

“should be required reading for politicians, military planners and journalists…”

“a much-needed critical perspective on the issue of drone strikes”

“a deep, culturally rooted indictment of the drone assassination program”

“as deft an examination of the issues as you can find…”

“a brave book that deals with very dark matters…”

“a robustly argued and disturbing work”

“a clarion call to reverse course…”

“elucidates a set of convincing arguments…”

“more than amply demonstrates that drone strikes are war crimes…”

“a chilling reminder of how far we have strayed…”

“this position certainly needs to be heard”

¨Calhoun’s plea – put an end to the mischievous extrajudicial murders with drones – is a necessary one, because it will ultimately turn against ourselves.¨

“We Kill Because We Can is a must read…”

Last resort has become first resort. Courage has become cowardice. Black ops have become standard operating procedure. An intelligence agency is now a killing machine. Self defense has become naked aggression. Guilt beyond a reasonable doubt has become possible future potential for guilt. Voices of dissent have been irrevocably silenced. Patriots have been replaced by mercenaries. Human rights have been eclipsed by concern with the protection of soldiers’ lives. The U.S. war on terrorism has been carried out using terrorist tactics, with formal military states emulating asymmetrical factional killers. Wars of necessity have been supplanted by ever-proliferating wars of choice.

Most disconcertingly of all, a nation which once was a beacon of hope to people around the globe has become an eagle-eye hovering above with extended claws, keen to “project power without projecting vulnerability.”

In We Kill Because We Can: From Soldiering to Assassination in the Drone Age, a new book by Laurie Calhoun, the practice of drone warfare, the targeted killing of persons by operators who are in no direct and immediate danger when they kill, is subjected to a thorough moral analysis and critique.

Calhoun examines the twenty-first-century practice of remote-control killing of suspects located in Third World countries and challenges readers to reflect upon the long-range implications—moral, political, psychological and cultural—of this new form of “warfare”. Through the use of provocative analogies and examples, We Kill Because We Can clarifies and criticizes targeted killing as incompatible with the values and principles of modern Western democratic societies.

Table of Contents
Foreword to the Paperback edition 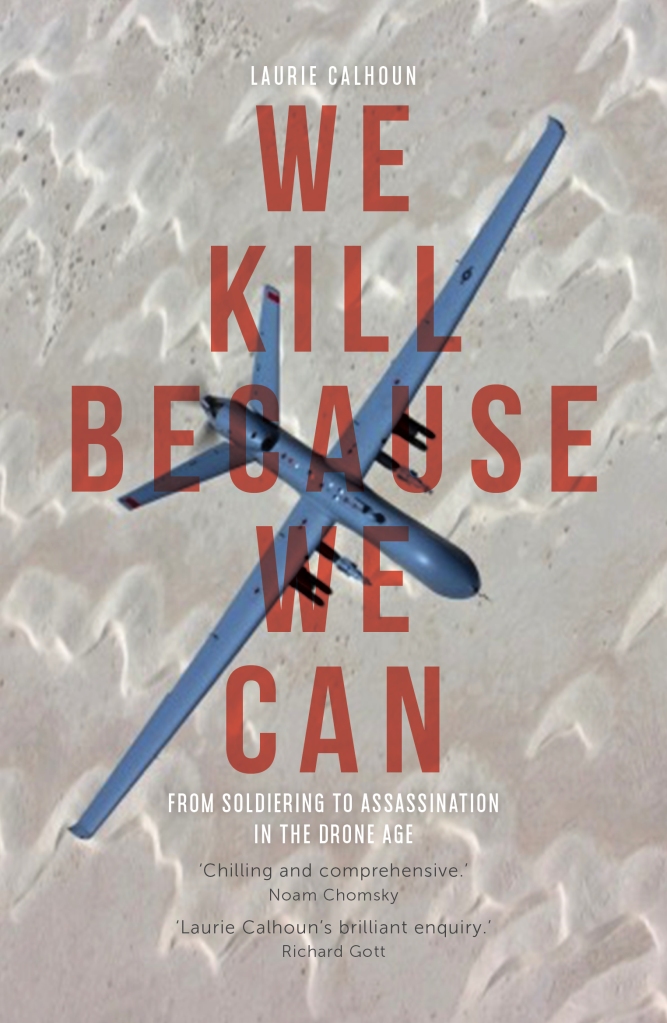